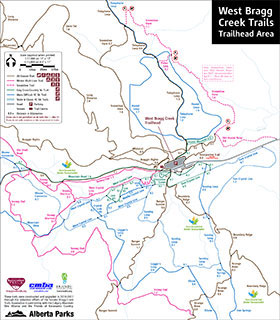 On a beautiful day in the southern Alberta foothills, you can find the trails in West Bragg Creek by following a steady stream of vehicles to the trailhead. Some people make their way by foot or bike via the newly built Great Trail, which parallels the West Bragg Creek Road and Range Road 54. Whichever way you choose to access the area, you’ll find a vast network of multi-use, non-motorized trails less than an hour from Calgary.

These days, a paved road connects the hamlet of Bragg Creek to the trailhead parking lot about 10 kilometres away. But the West Bragg Creek trails, in the heart of the Elbow River watershed, were not always so well known or well used. What began as a loose network of horse and cart trails, seismic cut-lines, mining roads and unofficial recreational trails has developed in the past 10 years into 152 kilometres of all-season trails. 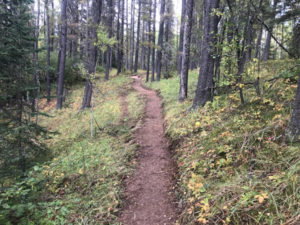 The Watershed Heritage Trail, proposed by the ERWP and completed in 2018, introduces hikers and walkers to the local landscape through a series of interpretive panels. See
sidebar story. Alf Skrastins photo

In the late 1970s, a cross country ski racer and trail builder named Don Gardner designed ski trails in the area. The loops were built around 1979 and included Crystal Line, Sundog and Elbow Trail as well as Hostel, Telephone and Moose loops. At the time, as Alf Skrastins writes in a document about the history of the trails, “the concept of groomed ski trails was virtually unknown in Alberta. Cross country skiing was really just ‘touring’ on hiking trails and fire-roads.”

Gardner’s trails were built in shaded valley bottoms, with a northeast-facing aspect and a wide tread, factors that maximized snow retention. They wound their way over creeks, bogs and marshy areas that froze during the winter months. These characteristics, which make for great winter trails, make for poor summer trails says Skrastins, who has been instrumental in trail design, building and maintenance for the past 10 years. 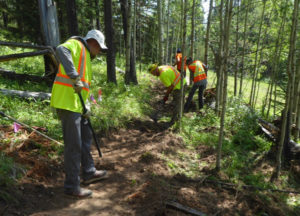 Provincial government budget cuts between 1992 and 2005 led to the deterioration of the West Bragg Creek ski trails, despite their growing popularity. That’s when local residents, led by a recently retired engineer named Eric Lloyd, came together to create the West Bragg Creek All Season Trail Plan (WBCASTP), a document that made official any plans for trails in the area. The Alberta government approved the plan in 2010.

“As soon as they approved the plan, they couldn’t stop us,” says Lloyd with a grin. “What they didn’t realize was that they were dealing with me.” Lloyd led the charge to get trails built quickly, starting in late 2010. The following year, Lloyd proposed building 40 more kilometres. People thought the plan was too ambitious (the word “crazy” was used) and suggested that 10 kilometres was a more realistic goal. Between June 7 and November 4, 2011, starting with one mini excavator, several employees and numerous volunteers, the GBCTA built 32 kilometres of new trails, including Ranger, Boundary, Snagmore, Braggin’ Rights, Long Distance and Reconnect. 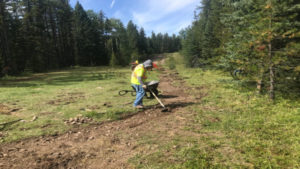 During the summer of 2019, trail builders worked on a singletrack trail that forms part of the Great Trail. Alf Skrastins photo

Why has he been so involved in trails? Lloyd shrugs. “I was only 55 when I retired, and I like trails,” he said. “What surprised me was that there were a lot of other people who liked trails.”

One of those people was Alf Skrastins, who has been volunteering in the area since at least 2009. Skrastins estimates that he spends up to 1,300 hours a year as a GBCTA volunteer trail builder and crew leader. Rather than just upgrading winter trails, Skrastins and fellow trail builders have created a multi-use, singletrack network for year-round recreation. The new trails are generally built in areas that dry out fastest (for example, along ridgetops with south- and west-facing aspects). These trails are narrower than ski-specific trails, scenic, not rolling, and include viewpoints when possible. They’re designed to be “flowing at the speed of a bicycle and interesting at the speed of walking,” Skrastins said. 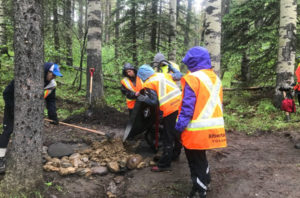 Mineral soil from a borrow pit is used to cover the base materials and build up the tread of a trail in West Bragg Creek. Alf Skrastins photo

“I get a great deal of satisfaction out of seeing people using the trails,” he added. “When I’m on any of these trails and see a spot that is now draining properly or a corner that comes to a viewpoint, I think, ‘yeah, I was involved in getting it to there.’”

Building durable and sustainable trails is the goal of the All Season Trail Plan. So is protecting the Elbow River watershed. In fact, minimizing impact on the watershed is one of the stated objectives of the WBCASTP. Volunteer builders follow a strict code of practices under the provincial Water Act. Lloyd, by the way, has more than a passing interest in watershed protection; he was the founding chair of the ERWP in 2002.

Conrad Schiebel, GBCTA president and a long-time trail builder and crew leader, says water management is one of the biggest issues in West Bragg Creek. “This is why we have endeavoured to move many of our trails up onto higher ground and try to avoid building close to riparian areas,” Schiebel said in an email. “We are always looking for well-drained sites to build or re-direct trails onto.”

When wet areas can’t be avoided, Schiebel added, crews use best practices “by ensuring that our bridge abutments are well placed and armoured and culverts are properly installed.” Crews spend a lot of time repairing drainage problems that develop either from poor design or from wear and tear. “Building a sustainable, well-drained trail is our ultimate goal,” Schiebel said. 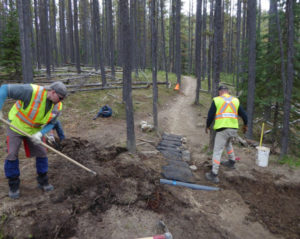 To preserve water quality, the GBCTA has built more than 30 bridges in West Bragg Creek. Bridges are preferable to culverts because they’re outside the water course and don’t freeze in winter. They also keep people and animals out of the water. However, sometimes a well-built culvert, like the new one along Moose Loop near Telephone Trail, is the solution for improved drainage.

Sometimes, Skrastins says, users are blamed for what is actually poor trail design. Widening trail footprints and poorly drained areas, for example, are design issues that he believes can be addressed. He also believes the trails can be engineered for volume as their popularity grows. “It’s all problem solving,” he said, “engineering and problem solving.”

Despite the GBCTA’s best efforts to minimize its impact, Schiebel notes that the number of users is ever-increasing—more than 185,000 people visited West Bragg Creek trails in 2018. “There are more people on the landscape with their horses and dogs that contribute to water degradation,” he said. “The parking lot and access road are now paved and contribute to the runoff into Bragg Creek.”

Another challenge for the GBCTA is balancing the needs of all land user groups: recreation, oil and gas, cattle grazing, resource extraction, etc. So far, Schiebel says, “respectful discussion and problem solving” have worked to minimize conflicts. Schiebel also said that concerns for disrupting wildlife habitat definitely play into trail design. “Using a multi-use trail concept decreases the need to build specialized trails on the same land base.”

“New” trails such as the singletrack trail along the north side of Moose Loop and the extension of Kestrel to Tom Snow were already on the original agreement with Alberta Parks. “Getting approval for new linear disturbance is not likely,” Lloyd said.

For his part, Lloyd doesn’t think the trails suffer from overuse. “As locals, we just learn when to go so that it’s not busy,” he said. With 152 kilometres of trails, he added, “You can have a lot of people on trails and not see anyone.”

As of early August 2019, more than 100 volunteers had come out for a GBCTA Trail Day this year – almost triple the number from the previous year.

Volunteers spent the first part of the summer doing maintenance on three popular trails (Braggin’ Rights, Merlin View and Ranger Summit). They are now building a new trail from the boggy sections of Moose Loop as part of the Great Trail and a connecter for Kestrel.

A trail day typically goes from 9am to 3pm. Volunteers do not require any experience.

In collaboration with GBCTA, the ERWP has completed a number of riparian restoration and protection projects in the West Bragg Creek day use area. These include bank stabilization with live willow stakes, trees and vegetated wall systems. The next ERWP riparian restoration day takes place Friday, Sept. 20 in the McLean Creek public land use zone. To volunteer with the ERWP, email Flora at coordinator@erwp.org.

The Watershed Heritage Trail, completed in late 2018, is an excellent example of a trail built using best practices. The 500-metre one-way stretch of singletrack starts at the east end of the West Bragg Creek parking area and winds its way up to the site of the former West Bragg Creek Hostel.

Six interpretive signs along the way introduce visitors to the trail and the surrounding wetlands, watershed and landscape. The ERWP worked in collaboration with the Greater Bragg Creek Trails Association, Bow River Basin Council, the Government of Alberta and the Bragg Creek Historical Society to complete the project.

For more about the Watershed Heritage Trail – https://www.brbc.ab.ca/our-activities/newsletters/287-preserving-our-lifeline-december-2018/file.